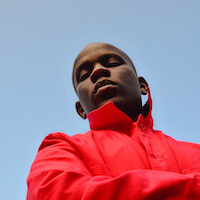 British-Ugandan artist Love Ssega is probably most widely known for being a founding member of Clean Bandit – writing Mozart’s House for the future Grammy winners – all whilst still at Cambridge University doing a PhD in Chemical Engineering. Studies complete, this enigmatic polymath has been quietly building an enthralling solo career blending a vibrant mix of New Wave, 80s Hip-Hop, African polyrhythms and NYC Disco into smart modern Pop.

In 2018, his energetic live show led to both BBC Music Introducing and BBC World Service marking Love Ssega as a promising British career artist to look out for on the international stage. Global performances followed, from the Main Stage at Lake of Stars, Malawi to back-to-back gigs in Seoul, South Korea, to the British Ambassador’s residence in Paris. His music has been synced on popular shows such as Made In Chelsea, to cult avant-garde productions at Sydney Opera House. Love Ssega was recently named as a British Council & PRS Foundation Musician in Residence, China – 2018/19 and has gone on to Headline the Electronic Stage at China’s leading Strawberry Music Festival in Chengdu, as well as a solo performance in Beijing.

Love Ssega’s overall music and artistic vision continues to surprise. Equally comfortable in the depths of South London, reflecting on a desolate hill in Kampala, Uganda or receiving invitations from GQ to London Fashion Week Mens, this is an artist with many experiences and stories to tell.